One year and one day ago (Maori name Otautahi), was hit with its second major earthquake in six months. The first being a 7.1 on . In Sept we were lucky. In Feb we were not. Tuesday 22nd Feb at 1.51pm a 6.3 hit closer to the CBD, 185 people were killed, thousands injured, and much of Chch was destroyed.
﻿﻿
﻿﻿

A week or so after the quake I drew a goblin who was stealing a friend's motivation to do anything and it grew from there. Moti wasn’t evil enough so I drew another then they just kept coming. I was dropping them on facebook and Anita started putting up little blurbs about them. Next thing you know we’re making a book. A month later it’s basically abandoned!! I was busy drawing other things and Anita was writing a novel!

But it wasn’t going to die with friends and family continuing to pester us about it. So two months ago it was all on. I’d like to say it’s all finished but the last 10 pages still need to be written then drawn! So I should probably stop blogging and draw.
Here is the first page. For keeping updated with the rest ‘Like’ us on facebook. 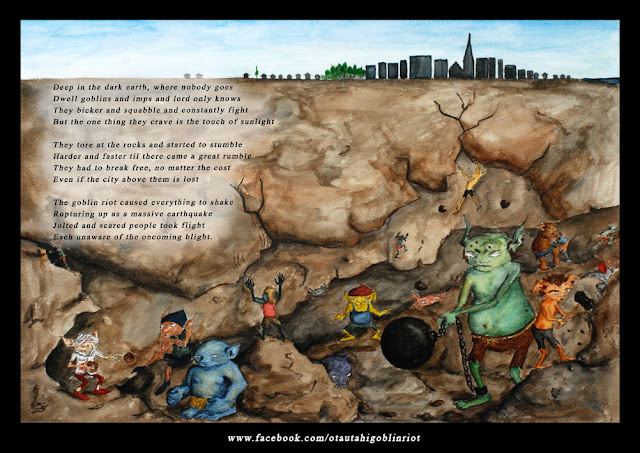 Other places I hide