The wisdom of Calvin.

This is me completely. Nothing happens until five hours after the 'oh shit it needs to be finished by tomorrow' moment. Which is why I found myself still trying to figure out what I am doing for an exhibition in July half an hour before I had to have the paperwork in the post (oh and I live a 10 minute drive from the nearest post office). The worst thing is is that I've know about it for months, the work should be finished (or at least started!) by now, all things like title, medium, size, price should be figured out after, not before! I have just under two months to get the work done and I know I'll still be doing it the morning of. One day I'll change... yeah probably not.
﻿﻿﻿﻿Yes I did get it in and only one of nine is untitled! Ok, that one is also completely unknown as to what it will be other than size, medium and price but it will be there... this is so not the right way to do things...
Posted by Unknown at 00:16 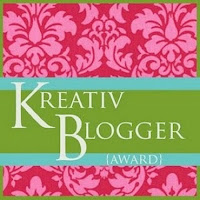 So I've been given this award twice this week so I thought I'd be good and do it! Thanks to Mina Lobo over at Some Dark Romantic and Amanda Heitler at Drama, Dice and Damsons for the award. And of course I'm going to chuck some art into it all so each random thing about me comes with a picture or photo.

The rules of this award are:

1. In a new blog post, thank and link back to the blog of the person who nominated you.

I'm tagging, drum roll please...
Whoever wants to do it. I know that is so so lazy but blogger is doing odd things and keeps crashing and I want to get some sleep and it doesn't seem like many of the peoples I follow (other than the two that gave this to me!) seem to be around much since A to Z. But if you choose to accept it leave a comment and I'll link it here. :D Actually, hold on a moment, I'll tag Anita at Mutterings from the Oubliette and Jade from Dream, Write, Publish. purely because they are friends out there in the real world and I wonder if they'll read this without me telling them about it! I shall have to do something evil if they don't of course. Ideas anyone?

1. I need to pick up the charcoal again. I miss making everything I touch black!

2. I see the complete opposite in this picture than the person that knows me best. But we both agree it's a self portrait of sorts.
3. I love fire.
4. ﻿This is true. If you manage to get in, and that is a pretty big if, chances are you've got a space for life.
﻿
5. It took two years from the idea to get to a place in my head where I could paint this. That was almost seven years ago and I still haven't got back to finish the series. It's not something I can do without complete isolation and the time to unlock some doors.


8. I love drawing feet and hands. Apparently that is odd.


9. A friend turned a silly doodle I did into a tattoo. He had a reason for it that I didn't know about until his funeral a year later. 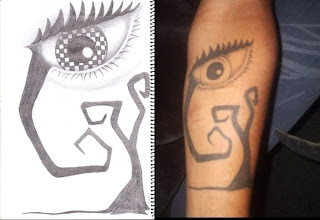 10. My other life. From birth until a year ago horses took up most of my time. Then I hit horse burn out and it seems like I've hardly had anything to do with them since. Ok so hardly anything down from managing two studs with 20 odd horses each by myself for other people and running a pony club with 60+ members means there are still 23 horses at home. But these days they are mostly my mother's not mine!
Posted by Unknown at 00:44

Welcome to my world.

I have my mojo back! It’s exciting after having misplaced it for the past month. I have all these ideas of what to do for a portfolio to send off to publishers. Now I just have to get the website up and running properly, oh and draw the pictures… minor details.

All sorts of other things to get done as well, I really need to get Goblin Riot finished. Only three spreads to go but it just hasn’t happened.

I want to get the photography thing back up and going again, I miss running around with a black growth at the end of my arm. Talking images of the art I’ve made just isn’t the same.

There is a local art exhibition in July which anyone can hand over some $ for and get a panel at but everything needs to be in by the end of this month. I need to know titles, size, medium. Would be simple if I had done the work in advance but well, I’m me, last minute is more my style so chances are it won’t be done until July. I just need to figure out what to do now so I can get the forms sent in!

I have to make a plushie zombie for Anita! How awesome!! I think I have the pattern sorted so now to make a mock up to check it works then go fabric hunting and making! And talking Anita, a crazy writer girl laptop cover has to be drawn… ohhh and all those other commissions for other friends that I promised I’d get onto asap… where did my list go? (Friends: If you’re reading this and I said I’d do something for you, REMIND ME!)

Eep I didn’t plan to come here to create a list of things I need to do, merely to come and say I GOT MY MOJO BACK! To say HELLO new followers and put up some pics of some of the things I drag around to markets so you can see more than what I did for A to Z. And that there is a whole heap more on facebook if you want to head over there and “Like” it.

So with no more rambling here is some of what I do...

I make bookmarks. They are all handpainted so although similar are all original. 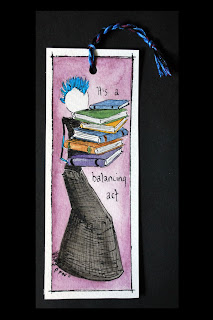 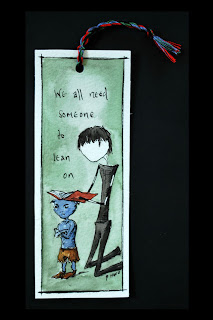 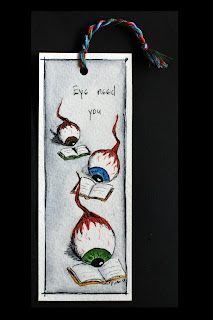 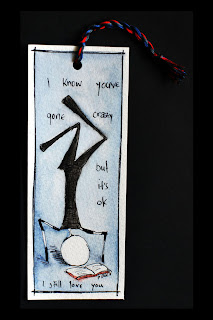 I do a pictures that are 16x21cm (framed). A bunch of these are also available on clothing through Print Mighty. 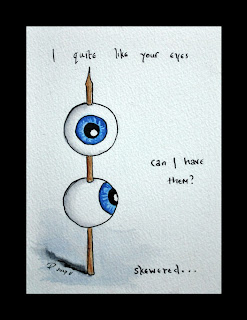 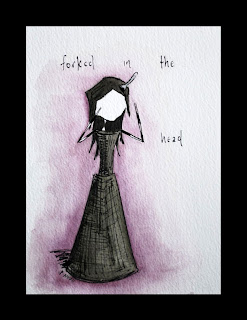 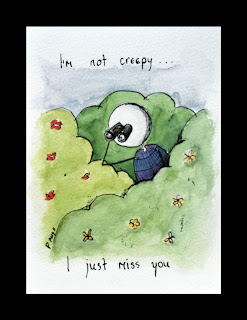 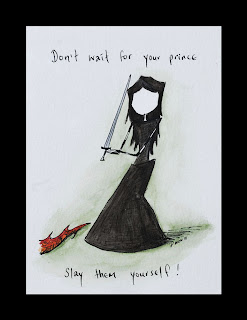 I make furry hats with ears... they go nicely with my gorilla slippers! Made from faux fur and felt, I make a range of colour combinations and ear types.
﻿﻿﻿﻿ 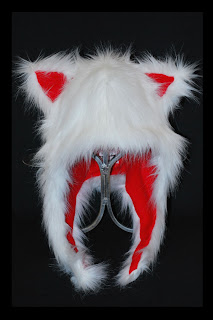 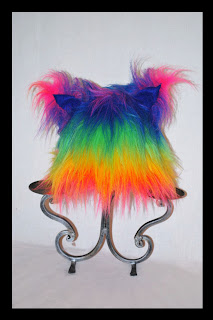 I was going to put some band photos up now but blogger has decided to crap out on me and the insert  image bit isn't working. Useless! So if you want to see some photos leave a comment and I'll put them up next post.

Now I feel like I need to put a disclaimer up about how it's all copyrighted to me so don't go stealing anything. But if you want to buy I ship worldwide! Yes shameless give me money plug, I'm a broke artist!
Posted by Unknown at 01:53

Email ThisBlogThis!Share to TwitterShare to FacebookShare to Pinterest
Labels: absconditus, art, forked in the head, I quite like your eyes, I'm not crazy just misunderstood, I'm not creepy, illustration

I looked into the mirror and A to Z was looking back at me.

﻿I signed up early March thinking sweet it’s a month away that gives me time to get everything written and drawn. Why I ever thought that I’d be that organised I don’t know! With most rhymes sorted and only a handful of pictures done April 1st arrived. A fantastic start with A not drawn until mid afternoon… however I got to the end and only a few were drawn and uploaded in the last hour (or minutes) of the day!

Random thoughts:
1.      Trying to visit nearly 2000 blogs in a month with dial up is a lesson in patience, cursing and dealing with RSI. Yes, I got RSI from constantly hitting refresh when they wouldn’t load. And I only got through 300…
2.      CAPTCHA doesn’t bother me as much as it seems to bother everyone else.
3.      I don’t understand getting followers just to get followers. I’d rather have people follow that are interested in what I do, not because they feel like they should. (Talking following – what happened to Follow up there at the top? It’s now Share…)
4.      Behind writer blogs, the most common blogs I came across were religion and mummy blogs. Only a tiny handful of art or music ones, sigh, maybe I’m yet to get to them.
5.      I think Mina Lobo's Blog Drinking Game is a fantastic idea.
6.      Drawing a character for every letter was harder than I thought it would be. I think if I’d stuck to my usual way of drawing them it would have been easier. But where is the fun in that?
7.      I got a whole heap of visitors, but I’m pretty sure 700 of them weren’t from and … but yay to the real visitors!
8.      I spent far too much time on this and ignored all the other art that needs doing.

So that’s it. A to Z done. Will I do it again next year? Maybe. Depends on where life is and what’s happening. Will I blog more from now on? I hope so. Will I visit everyone on the sign up Linky List. Eventually!
Posted by Unknown at 23:23

Email ThisBlogThis!Share to TwitterShare to FacebookShare to Pinterest
Labels: A to Z Challenge April 2012, I looked into the mirror and A to Z was looking back at me
Newer Posts Older Posts Home
Subscribe to: Posts (Atom)

Other places I hide